Discussions on creation beliefs within Christianity, and topics related to creation.
Post Reply
10 posts • Page 1 of 1

I was thinking today about Heaven. The Bible indicates that Heaven exists outside of time (I think...), so does this mean that when we die, all of our family and friends, actually, EVERYONE, will be there already? It is an entertaining thought, and I was just wondering your views on it.
Top

Let me challenge the "I think. . ." Where do you get the notion from that Heaven exists outside of time?

Does "eternal" for you necessarily imply "outside of time"?

For example, I believe God is eternal, however I also believe He willingly chose to enter into time at creation. So whereas God was timeless without creation, at creation God willingly decided to enter into time in order to have a true relationship with us. (Jac would disagree as he sees no inconsistency with God entering into time and yet remaining timeless - however I am just describing why I do not believe "eternal" does not necessarily imply "outside of time").
Top

I think that statement would qualify as a non sequitur. Also, eternal is in reference to time; hence, without time, you have no frame of reference for eternity.
Top

I think that statement would qualify as a non sequitur. Also, eternal is in reference to time; hence, without time, you have no frame of reference for eternity.

Now wait a minute. Wikipedia defines a non sequitur as "a conversational and literary device, often used for comical purposes (as opposed to its use in formal logic). It is a comment which, due to its apparent lack of meaning relative to what it follows, seems absurd to the point of being humorous or confusing, as in the following joke: Q: How many surrealists does it take to change a light bulb? A: Fish."

Was their statement really a comical statement as far removed logically from reality as the provided question and answer? I don't think so.

Even freshman high school algebra can provide an illustration as follows: 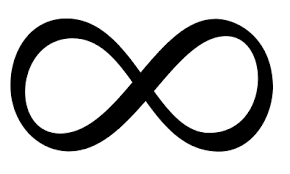 with the line representing the aggregate of time's existence (with a start and end origin) between the two infinite positions where time, as a function of our universe, ceases to exist.

All of which is very different from being compared to a fish, representing an unknown number of surrealists, screwing in a lightbulb.
Top

The english word heaven is used to represent various things in scripture including a location where God resides to space in this physical universe, for example. When talking about the first usage we have to look at where scripture says heaven is. It is definitely not a location in this physical universe currently. It cannot be as God resides there with Jesus at His right hand. However, that is going to change. Read David's 'The Theology of Heaven' http://www.kaleochurch.com/sermon/the-t ... of-heaven/
Top

Well, we could just wait and see when we get there.

"Fear of the Lord is the foundation of true knowledge." ~Proverbs 1:7

"The God of the universe---the Creator of nitrogen and pine needles, galaxies and E-minor---loves you with a radical, unconditional, self-sacrificing love." ~Francis Chan