Discussions about the Bible, and any issues raised by Scripture.
Post Reply
8 posts • Page 1 of 1

The following was posted on Instagram by Australia's perhaps best Rugby player -- his words in relation to the posted image below.


izzyfolau
Verified
Those that are living in Sin will end up in Hell unless you repent. Jesus Christ loves you and is giving you time to turn away from your sin and come to him.
_______________
Now the works of the flesh are manifest, which are these , adultery, fornication, uncleanness, lasciviousness, idolatry, witchcraft, hatred, variance, emulations, wrath, strife, seditions, heresies, envyings, murders, drunkenness, revelings, and such like: of the which I tell you before, as I have also told you in time past, that they which do such things shall not inherit the kingdom of God.
Galatians 5:19‭-‬21 KJV
_______________

Then Peter said unto them, Repent, and be baptized every one of you in the name of Jesus Christ for the remission of sins, and ye shall receive the gift of the Holy Ghost.
Acts 2:38 KJV
_______________ 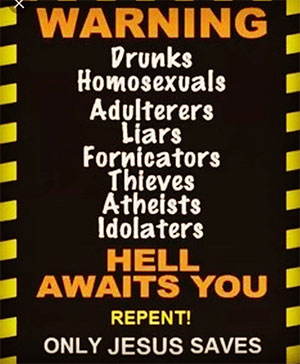 Israel Folau has now been dismissed by Rugby Australia over such "homophobic" comments. The MSM here and the Australian society it feeds, is incensed and there has been much hysteria. Is it just me, or have his comments been greatly blown out of proportion?
"Whoever will call on the name of the Lord will be saved." (Romans 10:13)
Top

I can't tell if they've been blown out of proportion, from what I've read. One Forbes article said that he's been warned for over a year, about his posting anti-homosexual posts. I'd have to see what he's been posting for a year.

If he has it in his contract, not to post stuff like that, as the article also said, then he can be fired for that.

In short, I can't tell if he's anti-homosexual, without his yearlong posts for context.

What he's clearly guilty of, from the one post that you linked, is misinterpreting scripture.
John 5:24
24 “Truly, truly, I say to you, he who hears My word, and believes Him who sent Me, has eternal life, and does not come into judgment, but has passed out of death into life. 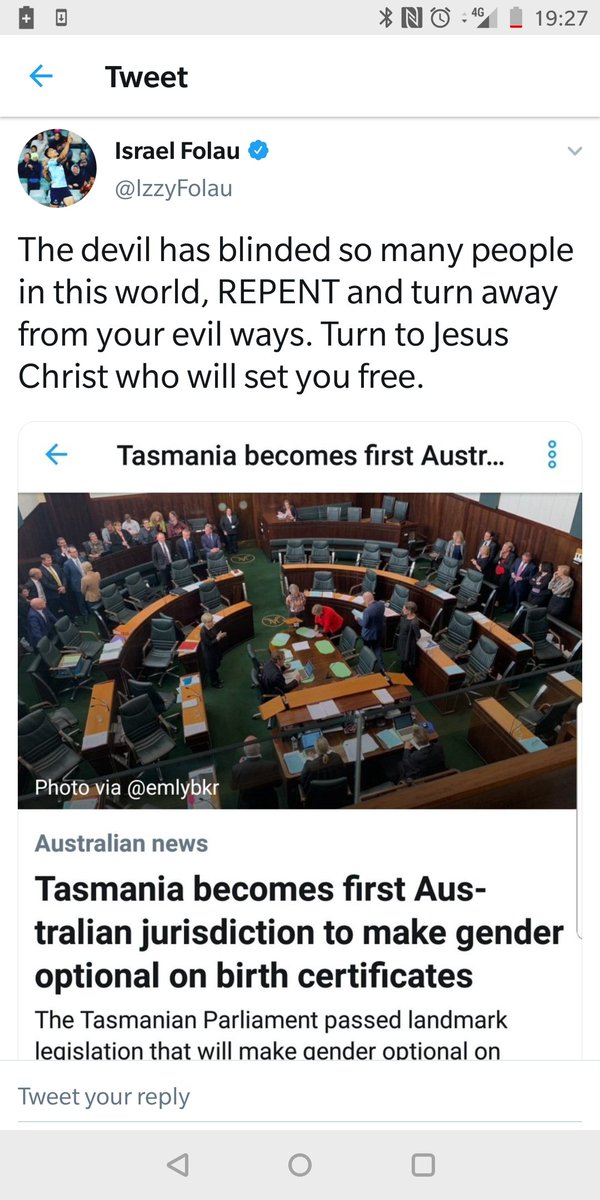 I can see how people could get offended by that.

If he has a history of calling homosexuality "evil", that could be considered anti-homosexual.

Maybe he doesn't realize that if someone is unsaved, whether or not the unsaved is caught up in homosexual sin, that calling them evil, usually doesn't get them to repent, and believe in Christ.

Are you familiar with his tweets?

Im not on twitter, so I can't see what he posted. Without context, I can't take a side on this one.

Edit: am I the only one who thought it was funny that he posted about Tasmania, and a devil?
John 5:24
24 “Truly, truly, I say to you, he who hears My word, and believes Him who sent Me, has eternal life, and does not come into judgment, but has passed out of death into life.

No, I'm actually not familiar with his tweets or social posts. But, due to the uproar, and he was the last name I remember before I stopped watching footy over here many years ago, so I tried looking up his posts to see how exaggerated the claims against him were.

These above two got the media and people riled up as "hateful". The one with "homosexual" in the picture (which he didn't mention in his own comments) was what go him sacked. As for the second, gender on a birth certificate, has nothing to do with being anti-trans, there are trans who also would disagree with such. Nonetheless that is how it is sliced, just like Peterson being a bigot and transphobic for saying that use of certain pronouns shouldn't be enforced.

Folau's "earlier" post which seems mentioned, I found it on news sites which just had extracted the comments and just highlighted what they wanted out of it. Someone asked if homosexuals were going to hell. His response was if they don't repent and come to Christ they will be. Omg, so hateful right?! Doesn't he know that homosexuals are a different class of humans who are fully righteous?

What you've picked up on, is that he lacks tact and is very forthright. But then, why should everyone always have to be politically tactful, and must we always be so very sensative to have mittens on? Is it our fault if we don't pad our mittens enough, and qualify our words? I guess if you don't want to stir up hate against yourself and lose your job, that is what Christians must be like.

My overall personal analysis is that his responses have been rather Christian, often simply quoting Scripture, though always focused on the side of repentance and like, moral Christian living, etc. Being well acquainted theologically with certain issues, I do detect he is Lordship Salvation tinted, but, he's a lay fervent Christian. And even if so, that's a Christian theological issue, not an issue of hatefulness.
"Whoever will call on the name of the Lord will be saved." (Romans 10:13)
Top

I also picked up on the Lordship Salvation, in what he says. This is one of his tweets:

To be born again you MUST, repent of your sins, be baptized in the name of Jesus Christ and then prayed upon asking God to receive the holy spirit.

If you've done it a different way from this then you aren't born again.

Lordship Salvation adherents tend to focus on the law. Which tends to lead to legalism, and judging unbelievers, as if they're believers. Expecting unbelievers to live as believers.
John 5:24
24 “Truly, truly, I say to you, he who hears My word, and believes Him who sent Me, has eternal life, and does not come into judgment, but has passed out of death into life.

Whatever the case with this fellow, to echo Rick, focusing on people's sins before you focus upon enlightening them to their need and hope for Christ has the cart before the horse. And I agree, it's mostly ineffective - or worse - it makes people run further in the other direction! Not to mention, in a society filled with chronic heterosexual adulterers and people whoring around, the focus is often homosexuality - which is rather ridiculous.
Top

What's ironic is what awaits just around the corner to many a naive "social justice" warrior. If they don't like Christian legalism, which however judgemental it might be, still allows people to live their lives their way -- just wait until they get a taste of Sharia Law. Brunei, coming to a place near you (maybe in the next 30 or so years)!
"Whoever will call on the name of the Lord will be saved." (Romans 10:13)
Top
Post Reply
8 posts • Page 1 of 1