Discussion for Christian perspectives on ethical issues such as abortion, euthanasia, sexuality, and so forth.
Post Reply
56 posts

We're told Solomon "had 700 wives, who were princesses, and 300 concubines." Just think of all of the drama in the royal harem.

Weird Wonder: How DID Solomon schedule so many "date" nights?

The math suggests that if he spent just ONE day with each wife, it would take him nearly TWO YEARS to do so. And that's not counting concubine time

. I'm guessing he had trouble with even knowing all of their names. Of course, many of them were no doubt political marriages in which he barely had any contact with them. And if they all had credit cards, no wonder he needed such immense wealth.

Really, how did Solomon even have the energy to administrate a kingdom - or the TIME to???!!!

Gotta give him props for stamina

Aren't the husband and wife, err wives, meant to share in responsibilities?

I'd feel sorry for the husband who has to cook for 700 wives.

Ummm...... Yes K I was talking about his stamina in the kitchen

In an anything goes world, why not?
"Whoever will call on the name of the Lord will be saved." (Romans 10:13)
Top

I posted this elsewhere, but it seems appropriate to post it here, too:

This is the most important line in the article and what is so infuriating to me:


The question is whether we will grant to them the same basic recognition we grant to other adults: that love makes marriage, and that the right to marry is exactly that, a right.

How has this not been the center of discussion for years? It's just obvious that it is not true that "love makes marriage." That's just a false premise. I realize that we have accepted that as a society. I argue we formally accepted in on January 1, 1970, when Ronald Reagan signed the country's first no-fault divorce bill into law in California. But regardless, this is what we should have been talking about for the past ten years--not that God defined marriage and not that it's in the Bible and not that the court doesn't have the right to redefine what a word has meant for millennia or other such things. All true as far as they go, but totally beside the point. When we implicitly grant the premise that love (understood in the popular sense of the word--romance and commitment) makes marriage, then we have given away the farm. Gay people can enter into a mere "love-contract." And you know what? So can groups. But that's not what makes something a marriage.

The problem is that heterosexuals themselves agree with the principle. They want their own "marriages" to be nothing more than love-contracts, that way they can get in and get out easily. They marry someone because they love them. They can put off kids or refuse to have them as long as they want. Kids get to be viewed of as a byproduct, sometimes happy and sometimes not, as a choice, that maybe comes along with the union. They get to look at marriage in a selfish manner, as if it is just designed to answer their own existential loneliness (which, by the way, points to much deeper theological problems--a sort of idolatry--inherent in the popular view). Or let me just quote our illustrious Justice's (to use the term with ironic looseness) on the matter: "Marriage responds to the universal fear that a lonely person might call out only to find no one there. It offers the hope of companionship and understanding and assurance that while both still live there will be someone to care for the other." And if that is all marriage is, then Kennedy is right.

But of course, that's not all that it is. That's not even what it primarily is. And how many people have been on the various news and radio stations addressing this real and central problem. In all the years I have been following this, I never once ever heard this point made. Yes, I've seen it discussed in various corners of the internet, but on a popular level? Never. In fact, I have a friend who is very socially conservative and a political activist who was shocked when I told him last night about this argument. The thought never occurred to him. He was convinced that marriage was, in fact, a private love-contract (something his libertarian leanings on economic matters made easy for him to assume). Now, this man has been following political news more closely than any of us have for about ten years. He knows many major Republican operatives on a first name basis. So I hold him up as an example of our failure--of my failure--in how we have been and are approaching this issue. And now we see the consequences.

You accept a lie, and its consequences will play out over time. There is no question of if. It is only a question of when. And the truly sad part is that we have yet to see all the consequences of this particular lie play out.

I'd encourage anyone take a look at this article, as it is purportedly written by a gay man who recognizes the basic truth what I'm saying here. Bottom line: we either get to this point our we'll continue down this road, further erode the family, and therefore further erode society itself.

I have seen and read this article. In fact I discussion with one person that polygamy can't work. Not only that but people are actually already practicing Polygamy so the majority of polygamy is practice in Utah and around Utah. So the majority will be Mormons but most are on welfare. One person had the nervous to say if my wife had another husband three incomes. That's not how it works. You still need to buy more than you need
Top

Also there is a new series called escaping from Polygamy
Top

UsagiTsukino wrote:I have seen and read this article. In fact I discussion with one person that polygamy can't work. Not only that but people are actually already practicing Polygamy so the majority of polygamy is practice in Utah and around Utah. So the majority will be Mormons but most are on welfare. One person had the nervous to say if my wife had another husband three incomes. That's not how it works. You still need to buy more than you need

Polygamy works fine, seemed to work fine in the O.T and still is very very common in the middle east and some of far east. It just doesn't work in the natural order God intended. And even God was okay with it for quite some time even telling David that HE would have given him more wives had David asked for it only.
It would be a blessing if they missed the cairns and got lost on the way back. Or if
the Thing on the ice got them tonight.
I could only turn and stare in horror at the chief surgeon.
Death by starvation is a terrible thing, Goodsir, continued Stanley.
And with that we went below to the flame-flickering Darkness of the lower deck
and to a cold almost the equal of the Dante-esque Ninth Circle Arctic Night
without.

UsagiTsukino wrote:What do u guys feel about Polygamy? And how does the world view it?

I don't think it is very likely, and don't know how they would go about doing it, but I think it would be nice if the government could just get out of the marriage business.

UsagiTsukino wrote:What do u guys feel about Polygamy? And how does the world view it?

I don't think it is very likely, and don't know how they would go about doing it, but I think it would be nice if the government could just get out of the marriage business.

What, and let go of some of their power over the sheep? Doubt it.
"Whoever will call on the name of the Lord will be saved." (Romans 10:13)
Top

Kurieuo wrote:I can't imagine having a second wife. One is enough.
Can't they just be concubines?

What dost thou think of this?.

She probably suggested it

I don't know... if you are brought up around it, it wouldnt be the same as suddenly having your husband with someone else as well... both are wrong and not how God intended,,, though he allowed it in the OT with king David etc.

It boggles the mind really

Kurieuo wrote:I can't imagine having a second wife. One is enough.
Can't they just be concubines?

What dost thou think of this?.

She probably suggested it

as long as they're not Kiwi. Told her not to worry, I'll never bring sheep into our relationship.

Isn't that the real reason Australia is evangelised by NZers?
We have all the real women and you guys have... well... sheep. 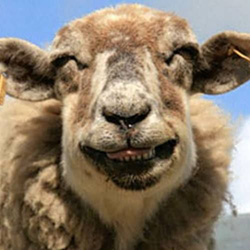 You must have visited near where I live then...

Return to “Moral and Ethical Affairs”