The Solution: Bring down the government and institutions?

Discussions amongst Christians about life issues, walking with Christ, and general Christian topics that don't fit under any other area.
Post Reply
3 posts • Page 1 of 1

The Solution: Bring down the government and institutions? Sorry for the length - almost typing as I think.

I loathe watching the news these days - seeing all of the mayhem around the country, all the raging and rioting - it's a really sad and frightening thing to see. And I DO realize many are really hurt and legitimately angered over injustices, racism, police brutality, etc. There ARE a lot of things it is perfectly reasonable to be upset at. But the question is, how should we channel that anger to bring about positive changes? Because we have a choice - we can either do things to heal and unite, OR we can sow the seeds and engage in actions that will only inflame others and make things FAR worse. People on all sides of issues today are demonizing and hating each other - over politics, race, religion - even over approaches to our pandemic.

Anyway, thinking about all this has me thinking about Jesus and the Apostles, as they walked the stone streets of ancient, Roman-occupied Judea. Think about it - Rome was a a slave-holding / trading, ruthless, conquering, aggressive nation renowned for its brutality and threatening other nations. The punishments they meted out for all manner of simple crimes was simply barbaric. Of course, the religious establishment was in cahoots with Roman authorities, as each did the dirty deeds of repression and control the other required. And yet, neither Jesus nor the apostles ever suggested that the answer to these many terrible things was to burn down all things associated with Rome, to attack it's establishment figures with violence and force - none of that. But WHY? He said to love God, love men, forgive and love your enemies? WHAT???!!! Was He mad? 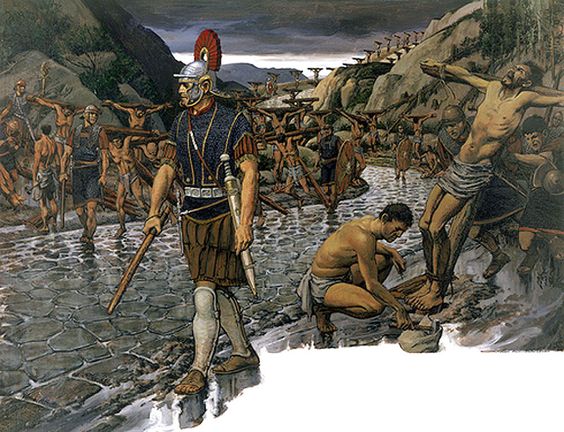 And this is the parallel to the ongoing terrible things we see that infects societies across the world today. It's not, "these people or those" - nor any certain persons or groups - it's individual human hearts and minds that are full of terrible thinking, desires and motivations. If we want to change society, we have to win over people's hearts and minds to Godly ways of thinking and living. And if you can do THAT, then - and ONLY then - will REAL change have a chance to come about in society. Martin Luther King understood this well - he humbled himself and preached non-violence and encouraged others of like minds and hearts to join him - and so God used him to help alter the consciences of millions of the majority culture and across all society. He was himself, a very flawed person, but he also well understood certain things of the heart and mind, and thus he knew violence and demonization of others would only inflame all sides, and ultimately, hurt everyone and make things far worse.

And what we all need to see, still - it's human hearts and minds that need changing - that's the REAL challenge and solution. Yet, even many Christians - we're missing it, as we think politically. But the solution won't come through aggression, rioting, political groups and strategies to suppress adversaries, inflammatory rhetoric, foaming at the mouth, anger, etc. Because while all that stuff might win some battles - maybe even some wars - ultimately, it won't bring about the changes within that are truly needed for long-term change - as those must begin within each heart and mind. And, of course, people need to turn to the Lord for guidance and strength to understand and do their part, to show others love, forgiveness, and for positive changes, both in ourselves and others. Right now, many of us, around the world, are focused only on things that might win small battles and merely bring about temporary changes. Revolutions and political movements come, go, fade, or die out - and are typically just re-runs of whatever past history - but they never truly get at the problem Jesus pointed to - which is WITHIN us.

Moses said it and Paul echoed it: “You stiff-necked people, uncircumcised in heart and ears, you always resist the Holy Spirit. As your fathers did, so do you."
Top

Re: The Solution: Bring down the government and institutions?

Deja vu all over again!

Re: The Solution: Bring down the government and institutions?

When you see the MEANS by which these people want the END, you realize how WRONG they are.

If,at the end, we look back and see the legacy of our change to be violence, death and destruction, what the END truly WORTH the means ??

Of course, for a generation, for a people, that believe the ends justify the means, many will say YES, it was all worth it !

To those I say:
YOU first.
YOU sacrifice first, YOU die first, YOU destroy YOUR possessions and futures first.
Top
Post Reply
3 posts • Page 1 of 1